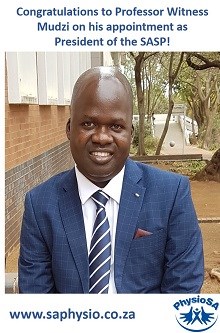 September 2017 has seen a change of guard at the South African Society of Physiotherapy, the society which looks after the interests of its members, registered physiotherapists. Professor Witness Mudzi has stepped into the position of President of the society, following in the shoes of Dr Ina Diener, who has held the position for two years.

Professor Mudzi says that one of his priorities is ensuring that members of the SASP realise the full value of their membership of the organisation, and he’ll be looking into the possibility of increasing the “bouquet of offerings” for members without necessarily increasing their membership fees. “I will also focus on ensuring that the profession of physiotherapy is well positioned for the imminent arrival of the National Health Insurance (NHI). There is need to continuously dialogue with the responsible authorities so that there is an understanding of the undisputable role of physiotherapists during the NHI era.” He also believes that physiotherapists need to have a better understanding of their role in the NHI.

Professor Mudzi has a BSc (Hon) from the University of Zimbabwe and an MSc and PhD from the University of the Witwatersrand (South Africa). His research interest is Adult Neurology (which includes stroke and spinal cord injuries) with the main area of interest being quality of life. His experience with research will stand him in good stead in his new role, where he will be working to improve student throughput and research publications – as well as growing his own research portfolio. He also now plans to do research into postgraduate education: varying from teaching strategies to teaching technologies and factors influencing students.