Hands on help for your best friends 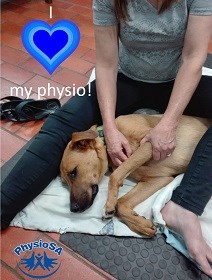 Hands on help for your best friends

It’s hard to watch a really good horse race without getting excited and screaming, “Go!” Horses, just like human athletes, can face challenges that push their performance below par, and like us, they could do with a bit of physiotherapy.

Gluteal muscles, cervical spine, deltoids – many of the names of the muscles, joints and bones are the same in the horse as in humans. So the four years of university education about human anatomy and physiology and how to treat conditions of the muscles, nerves and bones are a great foundation for physiotherapists with a special interest in treating animals as well. After two years of clinical experience with humans, physiotherapists can start doing the extra courses they need to work with animals.

Many of them will find themselves treating horses, both race horses and riding horses, but the big equines aren’t the only animals that benefit from physiotherapy.  Physiotherapists who are members of the Animal Physiotherapy Group of South Africa have been called on to treat cheetah, lions, snakes, birds, camels, zebra and even elephants. Some physiotherapists treat prize livestock such as cattle, some focus on smaller domestic animals, from guinea pigs and rabbits to cats.

Dogs like Benjy may find themselves at the physiotherapist. Benjy broke the growth plates in his front leg when he was a puppy, and corrective surgery was necessary to ensure his leg could grow to its natural length. After each surgery, Benjy spent time in physiotherapy, ensuring that the joints were aligned correctly and the muscles filled out and did their job.

His physiotherapist used hands-on mobilisation to release stiff muscles; she played with him, using games with a range of equipment to challenge his muscles; she walked him on an underwater treadmill to build strength, and took him into the swimming pool to get him using every part of the leg.

Post-operative rehabilitation is one of the major reasons for an animal to be treated by a physiotherapist with a special interest in animals.

Animals with ruptured tendons and ligaments, with muscle spasm or strain and tightness can benefit from physiotherapy.

The cruciate ligament is one of those structures humans and animals have in common, two bands of muscle that cross over in the knee, and which are prone to rupture painfully – many hours of physiotherapy are devoted to helping animals with cruciate ligament injuries.

When a dog, cat, or any other animal suffers a fracture, a few sessions of physiotherapy can boost healing and stability.

And then, of course, physiotherapists with a special interest in animals have extensive training that enables them to work with animal athletes like horse and working dogs, improving and maintaining range of movement and muscle tone.

Visit www.saphysio.co.za to find a physiotherapist with a special interest in animals.