Brain Break - Break it up! 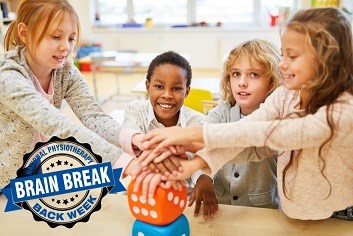 Children need to run and play often to develop and use their brains. For 2019’s National Physiotherapy BackWeek (1-8 September), the South African Society of Physiotherapy (SASP) is challenging schools to schedule brief ‘Brain Breaks’ to boost brainpower!

“Fitness not sitness and “Exercise grows brain cells” read the posters on walls in a South Carolina, USA’s school room. The educator running this programme understands that children do better at schools where they have more regular scheduled breaks for physical activity. He also knows that children who learn things while being physically active are more retentive and quicker to learn. So children might stair-climb while learning the times tables or doing a spelling exercise, for example.

Schools which tackle the activity challenge are basing their choices on solid science. Science has convinced us to issue activity guidelines (in most countries) which usually set a total time limit, for example: children need to do at least 60 minutes of physical activity per day.

But those following cutting edge science have realised that those sixty minutes could be even more effective at improving cognition, memory and sleep, and reducing depression, if they were sliced up into small chunks of time throughout the day. It’s been shown, for example, that children do best academically when given a physical activity that demands their attention and engagement, and that they enjoy.

Many of you will have seen the video footage from a Chinese school, of a principal leading the children in a synchronised dance. It went viral, and all of us who saw it instinctively understood that the children were having the time of their lives, and that school was the best thing ever for them.

The period from 6-12 years is a ‘Golden Age’; in this time, children are laying down habits which will last a lifetime. If they learn to spent most of their time sitting, they will end up leading a sedentary life. If they associate learning with fun, they will use their brains actively lifelong; and if they make a habit of spending a significant part of their school day enjoying physical activity, they’ll want to do that forever.

“Parents and teachers should work together to ensure that physical activity happens at the same time as learning,” says Professor Witness Mudzi, President of the SASP. “Physiotherapists can offer excellent advice on what sorts of activities to incorporate, intense bursts of activity which will grab the children’s attention and boost their brainpower”.

To find a physiotherapist near you, go to www.saphysio.co.za.