Beyond the six-pack: health tips for men 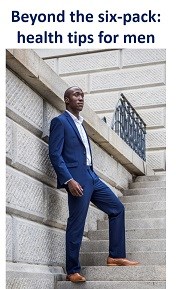 If you read the covers of health magazines aimed at men, you’d be forgiven for thinking that male health is all about abs and pecs and sex, sex, sex. Of course it is; but men who break through the muscle barrier and read more widely about health will know there’s a lot more to it.

• 5 times more men than women commit suicide
• The life expectancy of South African men is 50.7 years
• Worldwide, 1 in 6 men will get prostate cancer – the stats are higher for black men at 1 in 4. Prostate cancer is the top cancer for South African men
• When detected early, prostate cancer survival rates are better than 98%. Find it late, and those survival rates drop below 26%
• 1 in 3 South Africans – many of them men – will develop a mental health condition yet, in South Africa, it is estimated that 75% of people with a mental disorder do not receive mental health services
• Men are less likely to seek medical help, to access psychological services and are less likely to have a strong social support network.

Weak or brittle bones (osteoporosis) are not just a female problem – osteoporosis affects men too. In fact, a 2015 review of research pointed out that as many as one in four men over 50 will have at least one osteoporosis-related fracture in their lifetimes.
What to do? Two tips are to check your vitamin D status, and exercise! Weight-bearing exercise is great for bone health. And if you do discover your bone density has decreased, consult your physiotherapist about exercises that will strengthen muscles to protect vulnerable areas such as your spine, ribs, shoulders, wrists and hips.

“He had this pain in his chest, but he went to play golf anyway, saying he would ‘play through the pain’ and it would go away. He died that night.”
We’ve all heard stories like this. Men are notoriously doctor-shy. Pain in the chest or left arm, and that may radiate up into the jaw, always warrants a trip to ER.
To spot the other cardiovascular illness, stroke, act FAST:
• F: Face drooping
• A: Arm weakness
• S: Slurred speech
• T: Time to ring for help.
Physios are experts at treating people with heart disease and stroke but we prefer to also help men identify if they are at risk of these and advise them on what changes they can make. “We can treat you, but we’d rather not have to!” says Gerard Greene, a UK-based men’s health physio who will be presenting at the World Confederation for Physical Therapy’s Congress 2017, taking place in Cape Town from 2-4 July this year. He has also been invited by the South African Physiotherapy Society to present one of the first ever courses in men’s health to local physiotherapists, along with Australian physiotherapist Joanne Millios, focusing on male pelvic pain and prostate cancer rehab.

Did anyone in your family ever have prostate cancer? It’s the top cancer for men, with a higher risk if you have a family history of either breast or prostate cancer. If you are over 40 you should be speaking to your doctor about this.
If you or a friend or relative has had surgery for prostate cancer please urge them to see a physiotherapist, as they can help with the complications of urinary incontinence (leaking urine) and erectile dysfunction (getting it up). Physiotherapists do great work with these men and help them get their lives back together.

Suicide is not painless

“In South Africa about 8% of all deaths are due to suicide, although we think it’s actually higher,” says Greene. “Five times more males than females commit suicide.” The teen rate of suicide has more than doubled in the last 15 years, according to the South African Anxiety and Depression60% of those who have committed suicide have a history of depression.
Take action and get help if you are suffering from any kind of mental health problems – depression, anxiety, mood swings, post-traumatic stress (which is more common than you might realise in our society, where exposure to crime and violence is so high).
Remember that regular daily exercise can be an effective way of dealing with mild symptoms of conditions such as depression. If you embark on an exercise regime early on, it may be enough to stave off worse problems. But if your symptoms are serious, get help from a mental health professional urgently and avoid the risk of suicide. Your physiotherapist can guide you on what may be suitable exercise or enjoyable activities for you to start with and can also pick up if you need more specialist help.

As we get older our little friend also changes. “Jo Millios, a men’s health physio friend from Australia, has coined the phrase, ‘Hard Health = heart health’,” says Greene. “If your willy isn’t performing as well it may be the first signs of heart disease. Talk to your doctor and get it sorted before it’s a bigger problem. Pain in the penis, sensitivity in the penis or pain after ejaculation (cumming) is common in men with pelvic pain and men’s health physios can treat this and help you get back to normal. Pain or difficulty passing urine should be mentioned to your doctor as it may indicate a prostate problem. Keep an eye on your special friend as he is a good indicator of your general heath.”